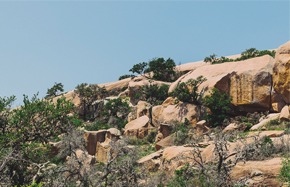 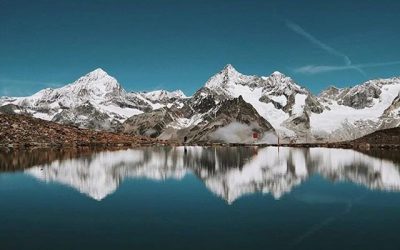 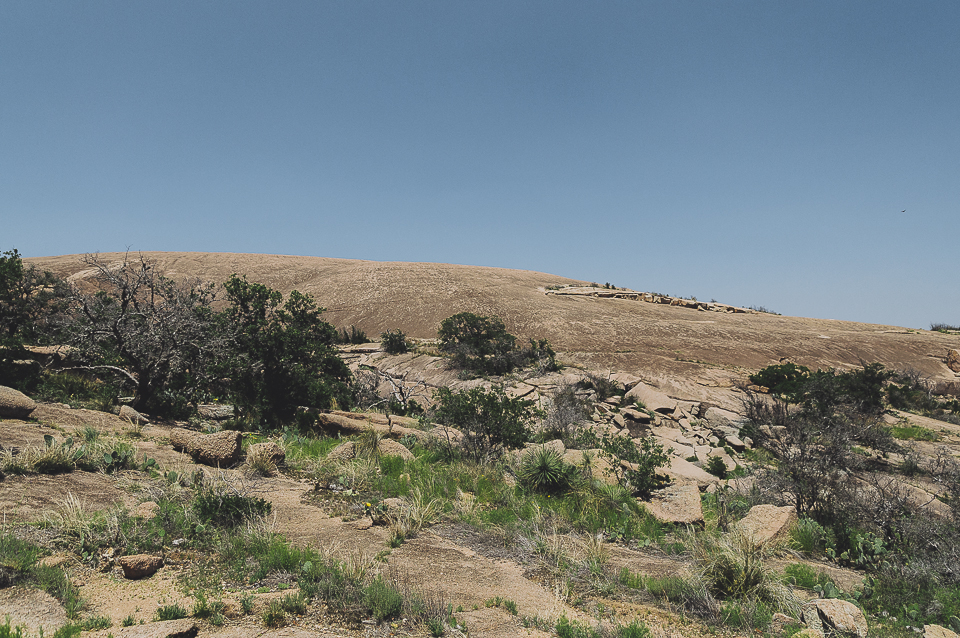 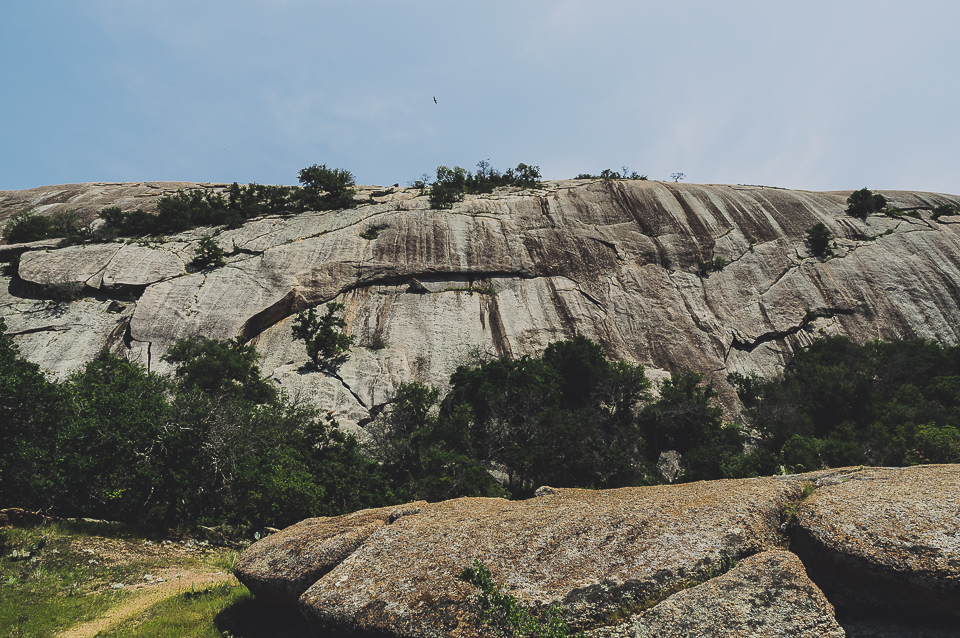 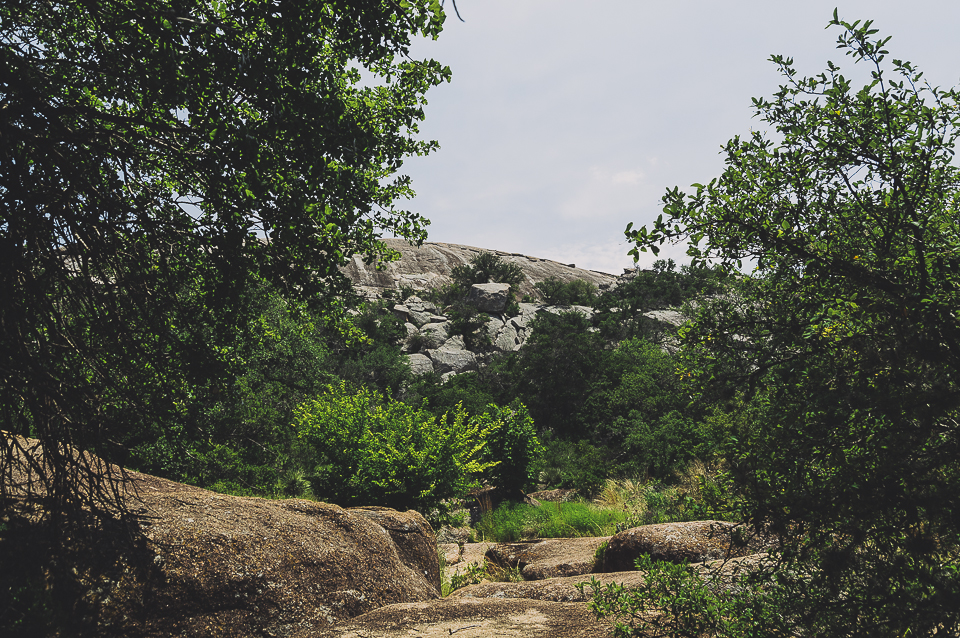 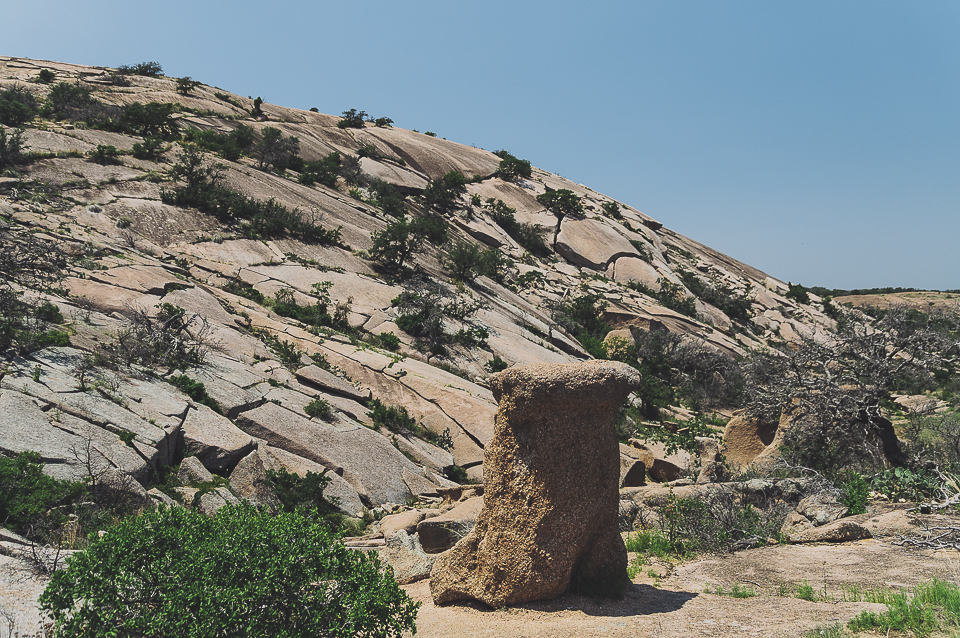 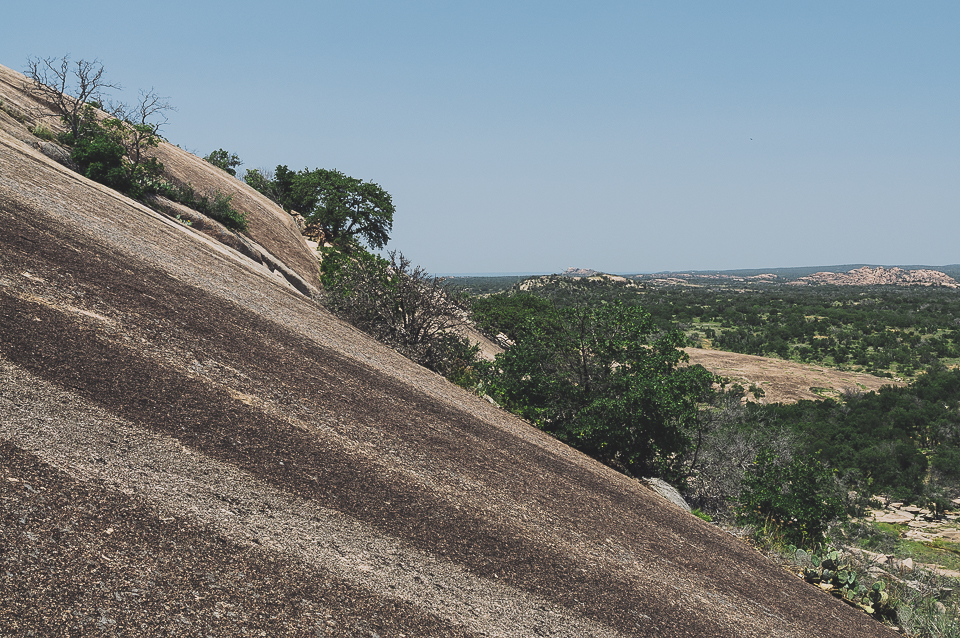 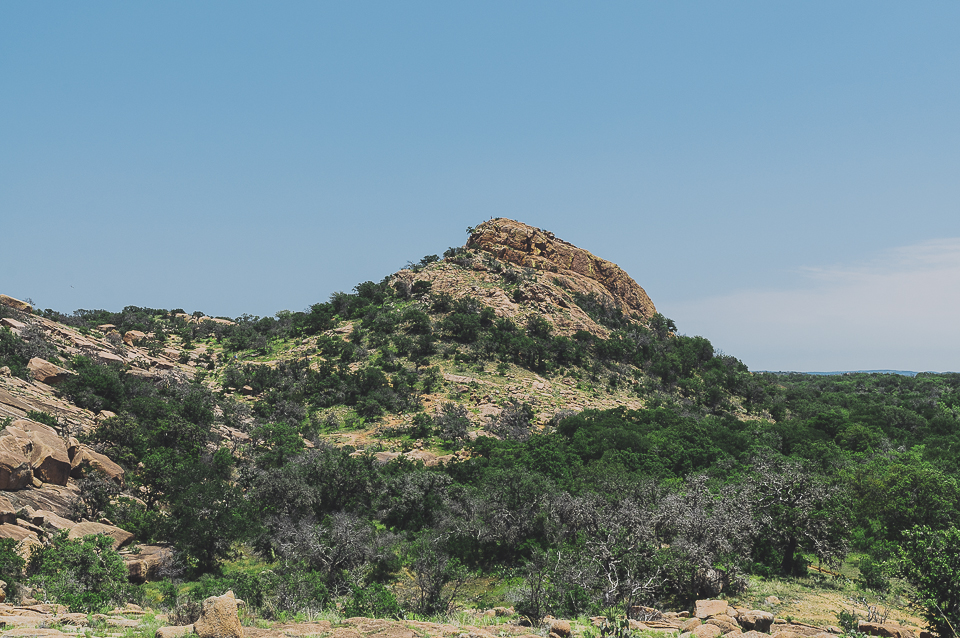 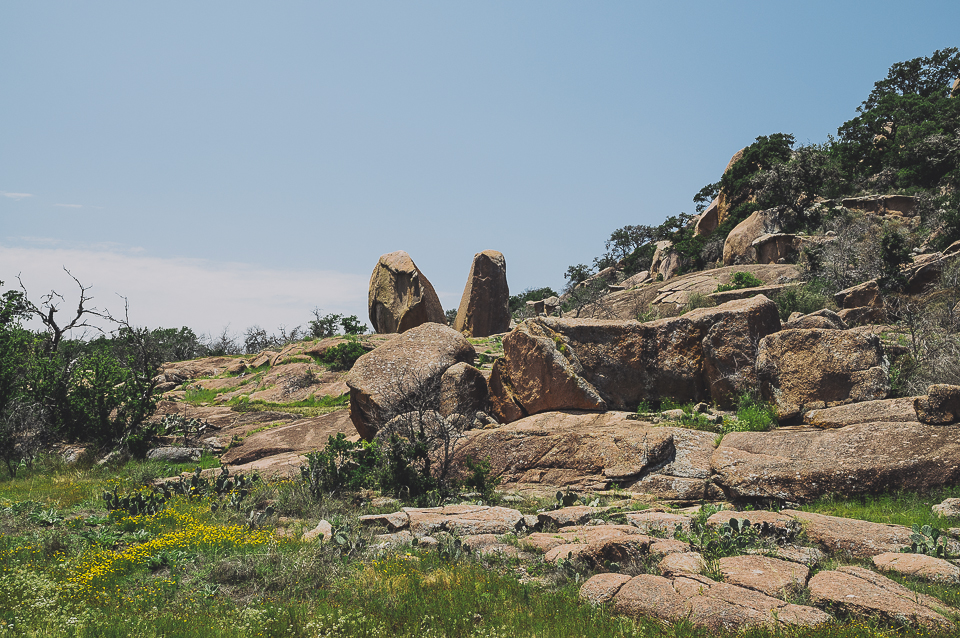 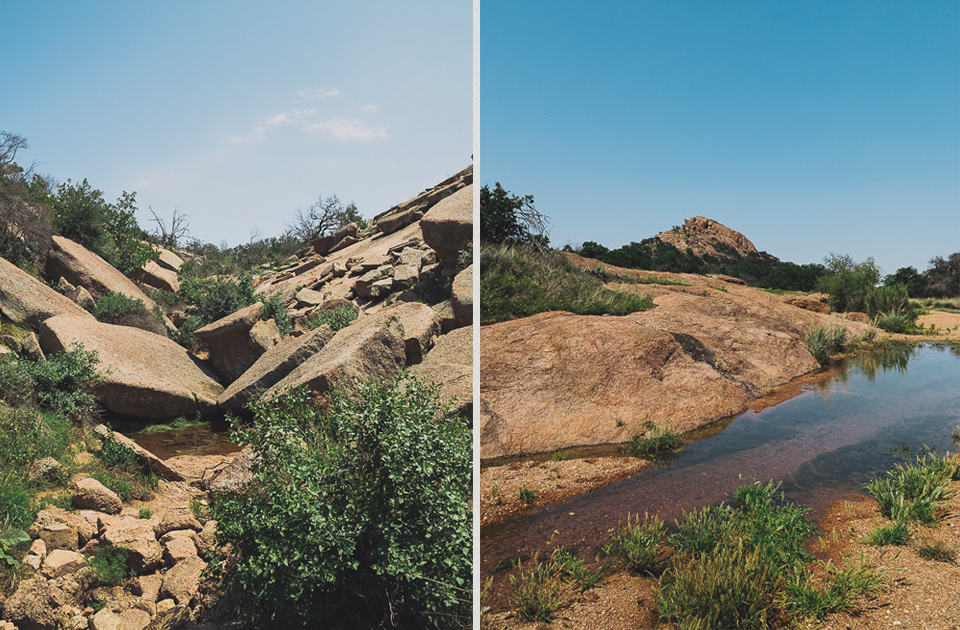 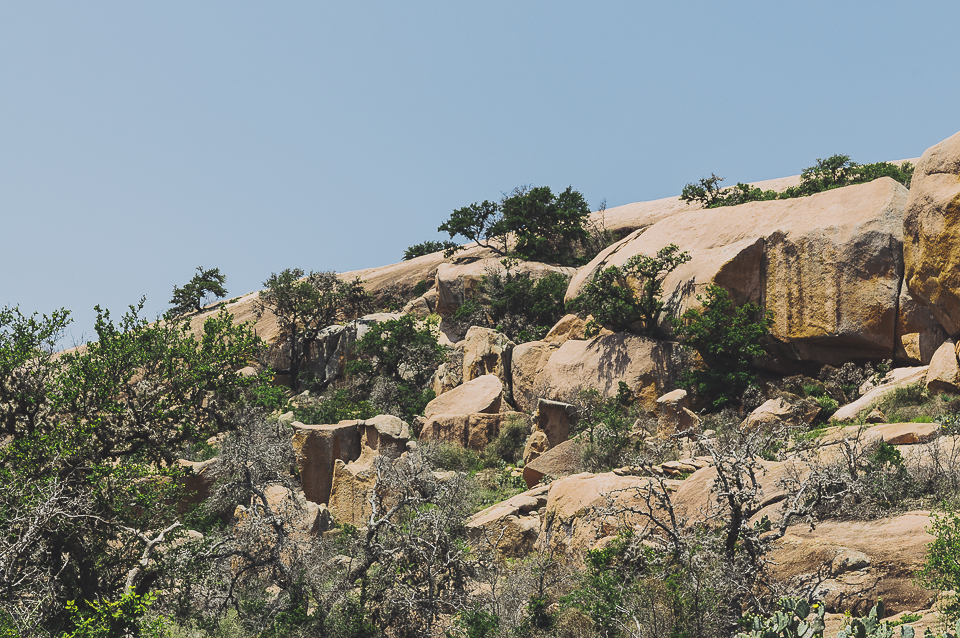 Enchanted Rock is located about 100 miles west of Austin, Texas, in the town of Fredericksburg. It’s my favorite place in the state, and I’ve been going there since I was seven years old. Any time I’m in south Texas, I try to make it out there to do some hiking, usually with my dad. I’ve been there several times over the years, my favorite time easily being a high school road trip with Jeremy Klapprodt in 1996 that found us camping out on the ground without any camping gear because we had no idea how to drive back to my parent’s place in the dark, about two hours away. The photos featured here were taken in May 2013, my last time there.

Indian folklore from Tonkawa, Apache and Comanche tribes talks of the rock’s magical and spiritual powers. While attempting to hide from Anglo settlers in the area, the natives would hide on the top two tiers of the rock, where they were invisible from the ground below. The Tonkawa, who lived in the area in the 16th century, believed that ghost fires flickered at the top of the dome. They talked of hearing unexplained creaking and groaning, which geologists attribute to the rock’s night-time contraction after being heated by the sun during the day. The name “Enchanted Rock” derives from Spanish and Anglo-Texan interpretations of such legends and related folklore.

It’s just a really fun place to explore and take photos, and it’s always been one of the most unique landscapes in the state to me. The pink granite domes can be seen for miles around. At the top of one of the domes, there’s a natural cave formation that extends around 1,000 feet through various fissures and hollow sections of the dome.

I got my first digital camera, a Sony Mavica, in 2001; it’s funny to look back and think how revolutionarly a 1.7 megapixel camera was that stored photos on small CD-Roms. I had a few point and shoots after that until buying a Nikon D90 in 2009. I was really lucky to take some great vacations to Ireland and Iceland in 2011, and I think that’s when I really started to love capturing landscapes and outdoor scenery.

I’m really drawn to vast wide angle landscapes, especially when they are devoid of manmade objects or buildings. I like when I can be in a place and realize it probably looks the same as it did hundreds of years ago. As far as photographers, I’ve always been drawn to  Peter Beard’s photos and journals. I don’t do anything that’s close to what he’s shot photos of at all, but the combination of photos, journals and collage images are a unique way of capturing more than just what something looked like. Being a snowboarder, I’m also a huge fan of the photographers who I see regularly in magazines – Daniel Blom, Oli Gagnon, and anyone whose photos appear on the Jones Snowboards site. So much artistry in this type of action sports photography. As far as tones go, I’m influenced quite a bit by photography in old travel books, and the textured, non-glossy prints.

I use a Nikon D90, and shoot mostly with a Tamron 17 – 50mm f2.8 lens. I really love that lens, and it’s a great range for going out with a single lens. I also have a 50mm f1.8, and a Sigma 70 – 210mm that really needs to be upgraded. I’m planning to upgrade to a Nikon D600 soon, and possibly a durable and waterproof point-and-shoot to take along snowboarding this winter. I also use my iPhone 5 and a Nikon Coolpix S8200.

I feel like I’m always trying to find the perfect travel bag and every-day photo bag. As far as travel bags, I’ve been really happy with an Incase backpack that has room for a laptop, and all my camera gear. I’m also a religious user of the VSCOCam iPhone app, and their Film presets for Lightroom.

Even though I’ve been to Iceland once, I really daydream often about going back to hike across the country. But I hope that my next big vacation will be to Switzerland, Austria, and northern Italy. I’d love to spend a couple weeks hiking and traveling around the Alps.